How to hire the right locksmith

How would you know if a locksmith is reliable?

Until there’s a legislation to regulate the locksmith trade, people are exposed to a delicate situation. Nowadays it doesn’t take any official permit from the states of UK to practice locks. So how do we avoid hiring a bad locksmith?

The locksmiths market in London and the UK is breached. In order to work in the field you don’t need a license or a certification from any governmental body. In order to provide services dealing with gas, electricity or pesticide you do need a governmental warranty, in the form of a license to a special permit. When it comes to locksmith however, anyone can present himself as a locksmith, change the cylinder at your home and if the person who provides the service is not trustworthy, he can also keep a copy of your keys without you knowing about it.

The problem with the lack of governmental permits isn’t the hundreds of locksmiths operating in the market in London, but rather the consumers who mostly order an emergency locksmith under pressure, since they got locked outside their house, and have no tools of knowing which locksmith is reliable and which one isn’t.

In order to reduce the risk, we gathered some advice from our professionals, which we hope will minimize the damage. There’s no doubt that the best tool is legislation and enforcement by the government. Until proper rules are implemented in Britain’s laws, it would be helpful to learn about how to spot an unreliable locksmith.

How to order a locksmith

If you wish to order a locksmith through the Internet it’s best to use well-established sites, which run surveillance and monitoring over their professionals. In addition, you can read reviews on each professional, and even do a quick search to see if he has any criminal records. You should avoid ordering a locksmith through flyers, magnets or stickers on your post box, and rather go with an organized company. You should also avoid scam sites that run their own forums, where they write positive opinions about themselves, supposedly as a third party. Sponsored ads on Google can also be used by con artists as they can be advertised and removed within seconds and aren’t build on website’s reputation. Therefore avoid going with a locksmith that are found in this type of advertising and don’t have a well-established background. 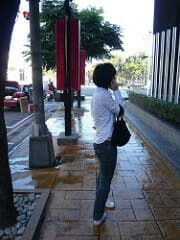 When the locksmith arrives

Do the locksmith presents himself as a “police certified”? Don’t believe it. There are quite a lot of locksmiths who come with a police sign on their clothing, their invoice or their car.
Don’t believe those who boast themselves as certified by the police, since as of today there is no official certification from any governmental body. Today, anyone can take a course and become a locksmith. Unreliable people do take advantage of this while manipulating innocent consumers. A lot of consumers ask us if we have a certification by the police, out of ignorance. The police doesn’t issue permits for locksmiths.

Even if someone went ahead with a DBS check and generated a certification of “no criminal record”, that doesn’t mean he is certified by the police. It just means he has no criminal records, but also this is only valid for that same day when the certification was generated of course. If later he commits a felony, no one will have obligations to any warranties against this certificate. Right now the police don’t have the jurisdiction to issue permits for locksmiths. It’s a breached market, where no governmental office gives any assurances or guarantees.

In case you don’t feel that you can trust the locksmith who arrived at your doorstep, try to notice as many means of identification as possible. You don’t have to be shy, you can save the locksmith’s car license plate number, ask him for an ID and write down his ID number. Keep as many identification details of him as possible: his phone numbers, his address (which should appear on the invoice), his picture, anything that can use you in case of any future breaking into your house. If he have any objections, that should trigger a red light for the consumer.

Is your locksmith installing a new cylinder? Ask to see the lock’s package. You should ask the locksmith to open cylinder’s package in front of you. Even if he tells you that he just opened the package, ask to see it with your own eyes. That should prevent a situation where he gives you a used cylinder that he might took apart from another door and refurbished, but the most important thing is that it reduces the chances that he’ll have a copy of the key.

Prefer a product with a warranty. Basically, a simple cylinder that costs £20, doesn’t come with a company warranty. However, a higher quality cylinder, which costs £35 or more, most likely will come with a warranty. In case of a malfunction, the manufacture or the importer provide the locksmith with a replacement product, which is good for both the locksmith and his customers. Generally speaking, a warranty gives answer and increases the chances that you’re dealing with a reliable professional and not a “cowboy”, even though this matter also has its exceptions.

After the work is done

At the end of the work ask for a receipt. That way you can keep the service provider’s details and in case of any future malfunction you’ll be covered by their warranty.

Will there be any legislation soon?

There are a number of locksmith associations that unifies locksmith companies under their wing, make background checks for any criminal records and by that insures the safety of the consumers, but there is no actual legislation in the locksmith field.
As of today, it seems that the government isn’t seeing the matter as important enough, probably because it’s a relatively small field with a few dozens or maybe hundreds of locksmiths in each city, so it isn’t worthwhile to establish a full system of legislation and enforcement specifically for the locksmith field. We see this as a major disadvantage, since the government doesn’t involve itself with the matter and doesn’t enforce people in the trade to have a proper qualification for working as locksmiths. They could do so by granting professional certifications from the state, and revoking licenses if needed. Since the lawyers, accountants and even real estate agents communities are large, the Government find it worthwhile to certify their fields. It is important for the safety of the citizens, and we would love to see such legislation-taking place in the future. Meanwhile choose your locksmith gravely.