All You Need to Know About Burglaries

Apparently it happens to everyone. Well maybe not everyone… but usually to those that lives for a couple of years or more in a ground floor flat or house in a city and without the proper deterrent in terms of home security(Security grilles, Alarm, CCTV).

Living in London for 5 years in various non-ground floor accommodation I had never had any issues with burglaries or burglary attempts. 4 month after  moving to my first hired ground floor flat, I’ve been burgled. Even thou a CCTV was right above their heads the burglars still made their move and broke in.

Coming home and finding a burgled door is shocking. You straight away start to think about your stuff and what could have been stolen. I remember an incident I’ve had while doing a job as locksmith to a nice couple in around their 40s’ somewhere in North London. The lock was jammed so I had to drill it, we walk inside and it took about 5 second till I hear the woman shouts “Where is the laptop?! Where is the TV?!… Oh my God, Oh my God…” and this “oh my god” kept going for the next 15 minutes. Apparently the burglars broke the glass of the patio door on the back, locked the front door‘s  lock from the inside with the small button on the lock‘s case and took everything they could put their hands on.

Being a locksmith you see many burgled properties and you come to wonder about what the process after burglary is like and what the people who just had a burglary probably feels, but you never really get to understand the whole experience.  You more like come to provide the service at the best possible way, rather than getting involved emotionally. A bit like a doctor and a patient.

Being burgled teaches you a lot and after experiencing a burglary I though I’d rather give some advice from the locksmith and security services provider point of view.

First thing first when you realize you’ve been burgled don’t touch anything, specially not flat and smooth surfaces and areas near the doors and windows. That would help the police to take finger and foot prints if those exist. After calling the police who will probably come at 2 times once for a police person to take personal info and details about the incident from you and the other for taking finger and foot prints(that’s done by 2 different departments).

When the police confirms that you can touch everything again, make sure to secure all windows and locks properly for the night. Burglars rarely compromise locks and don’t usually break big glasses(apparently because it’s noisy and dangerous). They mostly kick the door or use crowbar on either the door or window. If you call a locksmith make sure they secure your doors and windows properly. If they don’t have the appropriate locks(while they should), you can even go as far as bolting an access with screws just to keep it safe for the night. If burglar found a weak point in your security you wouldn’t want to leave it as it.

What should a tenant that had a burglary do?

Since landlords wouldn’t usually be happy to spend more money on security “just because” their tenant had a burglary. It’s your obligation as tenant to take care and protect yourself and your goods.

Even thou it can get to a few hundreds of quids to secure your property, you can usually find cost effective solutions that would provide some sort of cheap but effective deterrent and security. 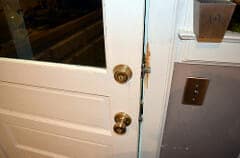 Things you can do before a burglary happens

you can buy and activate few of those. A burglar would most probably won’t realize it’s just a cheap alarm you bought off of eBay for few quid and would probably choose to hit the road rather then your place.

What Should a landlord do?

If you are the landlord of the property some of the above methods mentioned for tenants can also work for you, but we would strongly suggest that you give a bit more thought about the security of your tenants. At some point you’d probably need to secure your property to a suitable manner and it can also actually cost you with both money and time if a tenant leaves your property because they aren’t happy with the security. So why not just do it?

The best thing you can do as landlord is get the whole place fitted with security grilles and gates.

Alarms and CCTV are secondary and can also be very helpful but security grilles are a must.

If you wouldn’t like a gate installed on your door or can’t have it because the council will not allowed, you can also install metal doors or have your door frame changed to be opening outside and have security grilles fitted on the inside frame. Same goes for security grilles for windows.

Do you need to be worried?

The first few days after a burglary are the most worrying and stressful, this feeling is real and there for a good reason. Don’t let it go away doing nothing and just guessing that it’s not going to happen again or assuming that everything will be fine. There is a reason why it happened in the first place and if you leave things as is, it would most probably happen again. If you had a burglary or need further advice on how to secure your home in order to prevent one call a good locksmith and security specialists.

Find a Locksmith Near Me