How to open and fix a door latch that is jammed

Are you locked out having problems opening your door because the latch won’t retract to let the door open?

Here is how you can fix your jammed door.

Below are the ways of how to open, repair and replace a door latch.  The provided methods are arranged by their level of difficulty (easy to hard). Follow these as a step by step guide to get your door latch opened and fixed right away.

Before we look at how to repair a latch here is a note regarding all issues with UPVC Door – Latches or Mechanisms.

If your UPVC door is stuck shut or if you are having problems with the door you may need to contact a locksmith that offers UPVC door services.

Issues with UPVC doors, like when the latch is not retracting or when the locking mechanism is broken are usually not that easy to fix. If the mechanism is faulty it could be difficult to open the door and once you do you’ll most likely need to replace the mechanism.

All of these takes skill, time, and money. So if it’s an issue with a UPVC door you are having, it always recommended seeking professional help.

The first thing you can try for opening a jammed latch is to slide a plastic card (e.g. a credit card) between the door and the frame where the latch is located. This will hopefully force back the latch and the door will open. Slide in the card forcefully and play with it a bit while shaking the door a bit too at the same time. Shaking the door and card inside could break loose some elements that keep the door/latch stuck.

*If a “credit card” type of plastic card is too thick to slide in, you could try cutting out a rectangle shape piece out of a plastic bottle (e.g. coke 1.5l bottle) and use that.

Yes, I know. You’ve come here to learn how to open and fix the latch by yourself.  The thing is, if the latch is stuck beyond the point that you can release it with a PVC card then you’ll need to start using some destructive methods that may as well cause damage to your door or frame.

If you’re confident enough that when trying the methods which are described below you won’t be causing any damage to your door or frame, then go for it.

If not, then you might want to save yourself the risk of spending more time and money on the repairs of damages that could be the result of you trying to fix the issue by yourself.  Calling a locksmith is probably the easiest and safest way to get your door latch opened and repaired.

If you choose the right locksmith, it also doesn’t have to be that expensive.

Want to get your door latch issue solved within the hour and for the best price in London?

Talk to us now to find out more.

Below are the more advanced practices that you can take to try and open a jammed latch.

Again you should only try these if you’re comfortable working with DIY tools and confident that you can complete the work without damaging your door.

If the “credit card trick” didn’t work you can try to remove the trim around the edge of the door frame (on the latch side) and by inserting a thin, flat tool force the latch open.

This works similarly to the “card trick” only that by removing the trim around the door frame you’ll reveal the exact spot of the latch and can force it more effectively. In the video below find further instructions about how to do that.

The idea here is to remove your door’s handle and trying to pull the latch back from within the latch mechanism, to get the door open.

Start by removing the door handle.

This can be done with a screwdriver (Flat or Phillips) to remove all screws of the door handle’s plates. Ensure that the door is unlocked before doing so.

Once you’ve removed the handle, you can try to manually open the latch with either a pair of needle-nose pliers or a large flathead screwdriver. You’ll be able to see where the door handle spindle enters the dead latch mechanism. When you spin the handle to open a door this is also where the turn of the handle makes the latch pull back. On Kwikset locks, this will look like two small teeth that the cylinder pressed back.

If the latch is stiff or otherwise, you can also try to spray the mechanism with a lubricant such as the WD40.

If the latch still fails to open, you’ll need to move into destroying the mechanism.

Be extremely careful when destroying the latch mechanism to avoid damaging the door or harming your body. Make sure you wear protective gloves and glasses.

Assuming that you’ve already removed the door handle, your goal will be now to take out the wheel part where the spindle goes and reach the latch part inside the mechanism to pull it open.

For this, you’ll need to use your drill. With an 8mm drill bit drill in an angle, through the handle’s hole to remove the “wheel part” (where the spindle goes through). After removing the wheel try to grab the latch part with a screwdriver from inside of the mechanism and pull it towards the opposite side of the nearest frame to unlock the door.

If any of these were successful, you are by now able to open the door.

If you’d now like to replace your latch as well here is how you do it:

Should You Fix or Replace a Door Latch?

If you managed to open the door without damaging the door latch you could try to repair the latch.

Often however a faulty door latch would require a replacement and it may be wiser to just replace it anyway as latches are very cheap. And replacing a door latch is easy.

Simply purchase a new latch at any hardware or a locksmith store and fit it in the same location the old latch used to be fitted in.

How to Replace a Door Latch

1. Remove the current latch – Use a screwdriver to remove the handle and two screws that hold the plate which is facing the door frame.

4. Put the new latch into place.

5. Reassemble the parts – Insert the spindle and screw back the front plate of the latch (where the door meets the frame). After that place back the handles you’ve removed in earlier stages and screw it back into place to secure it.

If you’ve managed to resolve the issue by yourself that’s great!

If not, you can still consider calling a professional local locksmith for help. 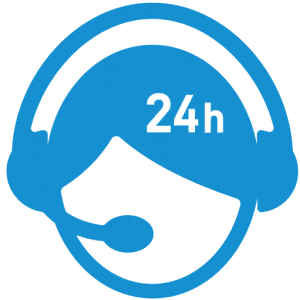