Pin tumbler locks are also known as Yale locks because they are manufactured and were created by the world renowned Yale brand. The Pin Tumbler Lock operates with a locking mechanism that makes use of different lengths of pins to secure a lock and prevent it from being opened by the wrong key. Cylinder locks and radial locks are known to be commonly fitted with Pin tumblers. 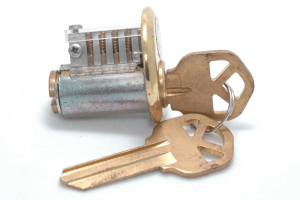 How do Pin Tumbler Locks work?

A Pin Tumbler lock consists of a sequence of pin stacks that are held down with the help of a spring. Every single stack needs to be properly raised in order for the pins to become separated at the shear line.  In the event all the pin stacks become separated the mechanism’s plug can rotate with ease and engage the locking bolt to unlock or lock a door. Because of this design, the wrong key will not fit into the locking mechanism and this will render the mechanism’s plug unable to rotate with the use of a false key.

The average Pin Tumbler Lock’s design utilises a blade’s edge as the primary bitting area. Slight changes and upgrades to the location of a pin tumbler’s components are what birthed the more modern designs of pin tumbler locks. Examples of said modern designs are the Axial/Tubular lock, and the Dimple lock.

Most Pin Tumblers are installed into cylinder locks. The cylinder lock is identifiable by its outer casing with its cylindrical hole that can be plugged with a Pin Tumbler Lock of your choosing. But for this amalgamation of locks to actually work together to lock and unlock a door, the inserted plug must be able to rotate while in its cylinder housing.

What is the history of Pin Tumbler Locks?

Pin Tumbler Locks have been securing London homes and businesses since their invention in the 1800s.

According to archaeological evidence, the original Pin Tumbler Lock was designed by ancient Egyptians about 4,000 years ago. But the Egyptian versions of the Pin Tumbler lock were quite large at a length of about 30-60cm. Not only that, they were also made of wood.

The Egyptian locking mechanism consisted of a post made of wood that was installed in a door. It had a horizontal bolt that was meant to slide in and out of the post. This lock that was made primarily of wood is considered to be one the major accomplishments of Ancient Egyptian architectural technology.

It was in 1805 that modern man improved on the original lock design of the Egyptians and patented a double-acting pin tumbler lock. Abraham O. Stansbury, an American physician, was awarded the patent.

However, in 1848, Linus Yale, Sr. took the ancient Egyptian design a step further by birthing a more improved form of the Pin Tumbler. But it was is son, Linus Yale, Jr. in 1861 who improved on his father’s design and gave us the Pin Tumbler Lock with its jagged edged key that we all know today

How much do Pin Tumbler Locks cost?

Pin tumbler locks are mostly inexpensive. Their prices tend to depend on the particular design of the lock in question. If you live in London and need installation or repair of a Pin Tumbler Lock, our expert locksmiths in London are available to serve you 24/7.

How secure are Pin Tumbler Locks?

Our experienced London locksmiths usually recommend Pin Tumbler Locks for their affordability and because they are resistant to extreme weather conditions. They are also well protected against drilling. But like most locks, they are vulnerable to lock snapping, lock picking, key bumping and pick guns. Thus, it’s always better to combine your Pin Tumbler with other locks for added security.

Best Locksmith - Best Value! All of our services are offered at best market prices.
We offer quality products to best meet your needs and your budget!

Find a local locksmith near you! Our locksmiths are well located to ensure best proximity to any area in Greater London. Have a locksmith at your place within 20-30 minutes!

With Us You Get