This lock is often mistaken for a Disc Tumbler lock, but they are actually very different. The Wafer Tumbler lock makes use of flat wafers to bar a locking mechanism from being operated. The flat wafers inside will only give way to the right set of keys. 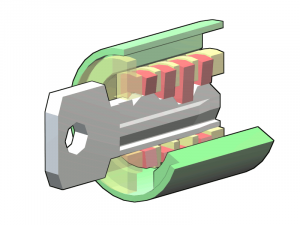 Pin Tumbler locks bear a resemblance to Wafer Tumblers because their mechanism operate on similar principles. But the wafer tumbler is different because the wafer located in its lock is usually a single piece, unlike that of a pin tumbler where the pin comes in multiple pieces.

How do Wafer Tumbler Locks work?

A series of flat wafers can be found inside a cylindrical wafer tumbler. Their purpose is to hold in place a cylindrical plug. These wafers are usually spring-loaded and fixed into upright slots inside the plug. This arrangement causes the wafers to protrude into wide grooves that are diametrically opposed and situated in the lock’s outer casing. The protruding wafers stuck in the wide grooves stop the rotation of the plug until the right key is inserted to unlock it.

Without the right key being inserted, the wafers remain held down by springs in the grooves of the outer cylinder’s lower part. Insertion of the correct key will raise the wafers out of the lower groove, but not high enough to cause it to enter the cylinder’s upper groove. Once the wafers are released, the key and the wafers can rotate to unlock or lock a door.

A basic wafer tumbler found on a London home’s door usually consists of the following parts;

Cam: This is located behind the plug and serves the function of activating the bolt to unlock or lock.

Springs: These are set on a wafer’s sides to eject them in the direction of the cylinder.

Wafer: The wafer is a flat piece of metal located in the lock plug and functions as the lock’s most crucial component. The size and protrusion of a wafer may vary.

Cylinder: This part of the lock is what houses the plug. Its function is to stop the rotation of the plug as long as the wafers are protruding into it.

Plug: This is the lock’s inner piece and it revolves upon insertion of the right key. It controls the bolt mechanism of the locks when it is turned.

The design of a Wafer Tumbler lock is usually dependent on its manufacturer. But the type of wafer tumbler lock most commonly seen around London homes are the Single-Bitted and the Double-Bitted.

What is the history of Wafer Tumbler Locks?

The first patent for a wafer tumbler lock was issued in the US to Philo Felter in 1868. But it was not long after that Hiram S. Shepardson introduced a single-bitted steel flat key that operated a modified version of the wafer tumbler.

In 1878, Yale acquired Shepardson’s lock company, alongside Felter’s lock manufacturing company. After that, the wafer tumbler technology didn’t undergo any significant advancement or improvement for many years. Until 1913 when Emil Christoph created another version of the wafer tumbler lock that used a double-bitted key.

How much do Wafer Tumbler Locks cost?

Our London locksmiths can provide you differently priced wafer tumbler locks for your London home. The price of a wafer tumbler is usually determined by its strength and quality. Those large enough and strong enough to secure entrance doors typically cost more than those used to secure furniture drawers.

For a wafer tumbler that’s reliable and yet fairly priced, our London locksmiths are who you should look to.

How secure are Wafer Tumbler Locks?

Wafer tumblers can adequately secure your home, but like all locks, they have their vulnerabilities. We can however offer you brands that manufacture higher security wafer tumblers.

With Us You Get